Christian Messier’s exhibition, la Forêt s’en vient II, or The Forest is Coming II, is a presentation of an exhibition organized by Galerie Verticale that was held in the new lobby of Salle André-Mathieu in Laval, which is intended to “professionalize their visual arts presentation”. This series of works was removed amidst some controversy earlier this year due to several complaints from the public after visiting the hall for a Bruno Pelletier show. The organizers demanded that six paintings be removed, to which, after a lengthy period of debate, Messier responded that the entire show must be taken down, asserting by an all or nothing policy that they are a whole not to be divided. These works on view at Galerie Laroche Joncas were displayed as they were intended to be exhibited, uncensored. The theme of proposals from which his work was chosen for the show in Laval was “the strange, humour and the grotesque”, presumably a response to the frequent stand-up comedy shows performed at the hall. Ironically, comedy shows gain nearly all of their popularity through bawdy humour, taboo, and controversial topics, but apparently, some nudity in the hall on the way to the show was too much for some visitors to bear, or at least for the Pelletier crowd. The six paintings which were censored did not feature simple classical nudity, as some of Messier’s works in this series resemble, such as the canvas of figures cavorting in an elegant circle la Matisse’s dancers. Instead, it was the works which displayed any semblance of sexuality, through the groping of breasts, implied orgies or sexual activity that the ones which stimulated complaint.

…. Read in full at The Belgo Report

I’m writing for The Belgo Report, reviews and updates about what is going on in the biggest art centre in Montreal. My first two pieces were about painting, an encaustic series inspired by  the writings of Camus by Sébastian Maltais and abstract pieces of explosions by Sebastien Worsnip. 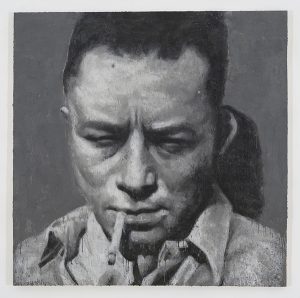